In these pages may be found over 4,500 burial records for Crosthwaite & Lyth. Of these, 1,772 have known graves which are mapped. Between 1631 & 1847, at least 129 burials took place within the church itself. There are photographs of all 289 headstones with their inscriptions transcribed.

At an early stage during this research it became clear that the records are more about the history of the people of Crosthwaite & Lyth than the deceased. By sorting the records according to place, it is possible to reconstruct a timeline of the ownership of the various farms and properties. After sorting the records by date, many tragic tales of mothers and babies dying in childbirth can be found. Whole families were wiped out over the course of a few days, from disease. One poignant example of many is that of the Walker children of Bowland Bridge in 1872, and many more examples may be found. The Addison family suffered the loss of six still-born babies between 1751 and 1761. Particularly striking are the effects of the great plagues, which by analysing these burial records, indicate that about half the population died from plague between 1650 and 1670.

The two longest living residents, surprisingly, were born in the 17th century, Judith Suert and Edmund Shaw, aged 103 and 102 respectively.

Since after around 1800 the ages of all the deceased are recorded, it is possible to generate population and life expectancy data over the decades. These results can be found here.

A history of St. Mary's church itself may be found here and St.Mary's web page here.

The earliest church records show burials from 1568, but there is no indication as to where these early graves are. No plans have been found (not even in the Kendal records office) for burials between then and 1863.

After the Dissolution in 1535, one of the most important consequences to Crosthwaite was that the Rectoral rights of the parish of Heversham, which included Crosthwaite chapel and which had been owned by St Mary's Abbey in York, passed to the crown, and eventually in 1558, to Trinity College, Cambridge. This must have been in prospect for some time, as in 1556 John Christoferson, Master of Trinity Collage, petitioned Cuthbert, Bishop of Chester, for a licence to administer the sacraments at Crosthwaite chapel. The deed granting the licence states:

"Cuthbert by divine permission Bishop of Chester to all Sons of the Holy Mother Church. . . We would have it known to you all in general that the Parishioners and Inhabitants of the parish of Heverahsm in our Diocese and jurisdiction who sojourn in the villages and hamlets of Crosthwaite and Lyth manifest, situated within the bounds and limits of the same parish, have lately by heavy complaint made known unto us that they live so far distant, viz 4,5,6 miles distant from the said parish church of Heversham, they can neither carry the bodies of their dead for burial to the aforesaid Church of Heversham as they are obliged to do without great expense and inconvenience, nor their children to be baptised without great danger as well of Soul as of Body . . "

The burials would therefore have taken place around or in "the chapel" as the early church was known.

"The award after the dispute in 1580 between the inhabitants of Crosthwaite and the parent church in Heversham, allowed the people of the former to be buried in their chapel for small fees; hence the extraordinary number, or it may be to also show correctly the fees to be paid to Heversham."

From 1797, these early graves are defined as distances from features around the church which mostly no longer exist. A plan has been reconstructed from these descriptions and a discussion about how this plan was reconstructed may be found here.

After 1797, burials took place on the south side of the church and within about 25 feet of the eastern end of the church at that time (the present church minus the apse extension). This eastern extremity was bounded by "Garnett's wall", and the field beyond to the road, being owned by William Garnett. The area to the North of the church started to be used from about 1831. The graves around the church were just six feet in length and three feet in width. Unlike today, most of the graves are unmarked, so it may at first appear to the visitor that there are not many graves here. In fact the opposite is true, with at least 750 people buried around the church since 1800.

In 1811, an atrocity was committed in the church:-

1811 15 July. Indictment that Nicholas Long of Crosthwaite and Lyth, labourer and Martin Crosthwaite of the same, labourer, on the 1 October with force and arms at the church there situate, did unlawfully and wilfully break and enter the grave within the said church in which one William Garnett, deceased, had lately been interred, and indecently did then and there force break and open the coffin and did beat, mangle, tear, cut, disfigure, expose, lay naked and open to the sight the body to the great scandal and disgust of all Christian people, etc. (K. Indictment Book, 1811–17). On 7 October, 1811, the two defendants were found guilty, and were each fined 5 shillings, which they paid to the Sheriff.

The church records show that William Garnett was interred on the 5th September 1803 "1 yards from the sole of the aisle & 1 yard from the Curch side to the other side of the grave & the foot of is grave is close to the high pew." 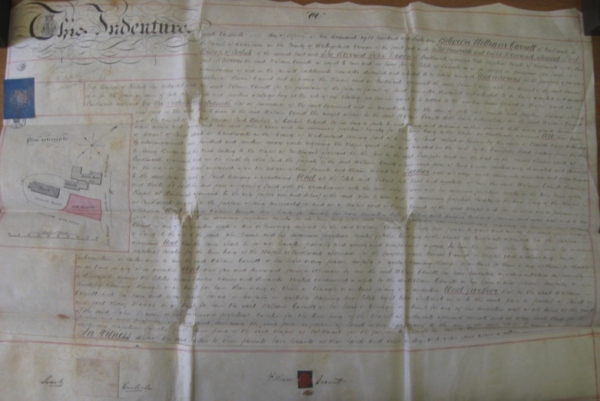 On the 6th April 1861, a later William Garnett sold his field to the church.

The intervening wall was demolished, and burials took place up to the road. In Garnett's field, the graves were more spacious (nine feet by four feet), except for a few graves around the perimeter which were smaller and reserved for children. At this time, new graves were dug on the south side of the church, overlying the previous graves, but this time the grave size was eight feet by four feet.

When the church was enlarged in 1878, a transept was added on the South side and an apse added to the Eastern end of the church. The remains disturbed during this building work (estimated to be around sixty bodies) were relocated to an area in the south west corner of the graveyard.

At the end of the nineteenth century, there was no space left around the church and a new graveyard was opened up 100 yards away to the west. It is estimated that there will be sufficient capacity in this graveyard to last until the end of the twenty-first century. 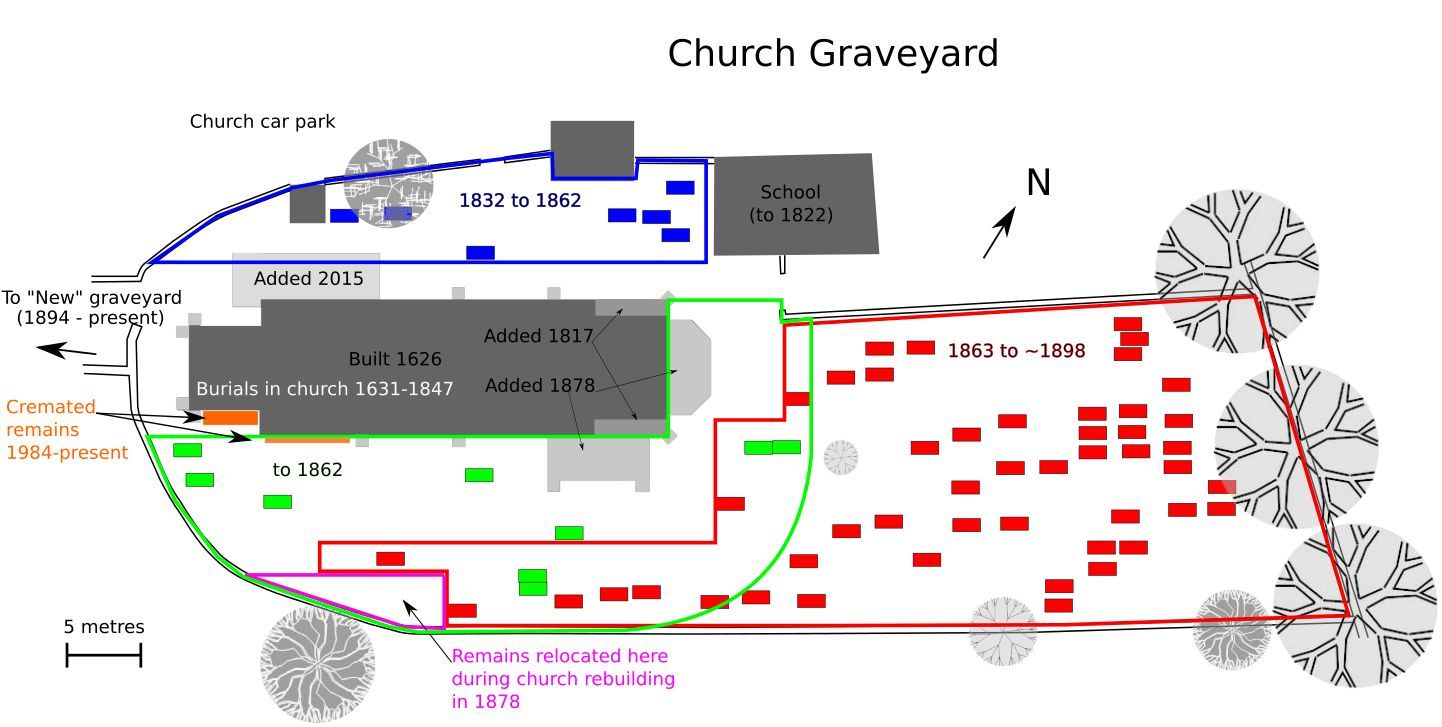 Firstly, I would like to thank St. Mary's PCC for sanctioning this project.

Secondly, I would like to thank John Sceal for offering to host these pages on the Crosthwaite & Lyth web site.

I would also like to thank Matthew Dobson (church Warden) for making the burial records available to me, Pam Bownass for letting me have a copy of her headstone transcriptions and Hartley Trotter for helping with place names and local history. The book "Cameos of Crosthwaite & Lyth" by Pam Bownass, Hartley Trotter & Penny Mutch was invaluable. Peter Windsor's booklet "Poppies in the Lyth Valley" was useful for details of the soldiers from Crosthwaite & Lyth who fell in WW1. Last but not least, I would like to thank my wife, Rosalind, for suggesting this project in the first place, and helping with the project.